What is Cuphead?
Cuphead is a classic run and gun action game heavily focused on boss battles. Inspired by cartoons of the 1930s, the visuals and audio are painstakingly created with the same techniques of the era, i.e. traditional hand drawn cel animation, watercolor backgrounds, and original jazz recordings. Play as Cuphead or Mugman (in single player or local co-op) as you traverse strange worlds, acquire new weapons, learn powerful super moves, and discover hidden secrets while you try to pay your debt back to the devil!

When will Cuphead be released?
Cuphead will be released September 29th.

I love the style and visuals in Cuphead. Is it all hand-drawn?
We also love it! And it’s a good thing too, because it takes a whole pile of work to bring this 1930’s aesthetic to Cuphead in the truest form we possibly can. We are heavily inspired by vintage Fleischer Studios and Disney hand-drawn animation, but still delve into other classic studios for inspiration – ComiColor, Van Beuren, Columbia Pictures, Copley Pictures and more. We made a short video for TIME Magazine that shows the process of the what goes into a single frame of Cuphead here: http://ti.me/1Q4wDTA.

The art is beautiful, but what about the gameplay?
Even though the art is an important part of our game, we always put gameplay first! We have spent a crazy amount of time fine-tuning small details like hitboxes, screen movement, weapon balancing, and input response time to ensure Cuphead plays as good as it looks. Some of the games that influenced our design choices are: Gunstar Heroes, Contra III, Contra Hard Corps, Super Mario World, Street Fighter III, Mega Man, and the Thunderforce series.

Why has Cuphead been delayed multiple times? Has the scope changed?
No one likes delays, we get it. Honestly, we don’t like them either. But, sometimes they are a necessary evil.

We had an initial “dream scope” planned for Cuphead. This original plan even included platforming levels. However, since we had humble beginnings as a 3-person team it was obvious that we had to shoot for something a little more realistic. Our intention was to release a very small game, with only bosses, in the hope that we could build a fan base and look at expanding the game down the road.

To our surprise we received a ton of love from the gaming and art communities and decided it was time to up the ante. We quit our jobs, maxed out every loan possible, and partnered with Microsoft. This allowed us to expand the team and produce a larger game. As time passed, we decided to just GO FOR IT and bring back most of our original “dream scope”. Even with a larger team, the final scope of the game is a ton of work. The idea of rushing or cutting corners just to launch is not in our vocabulary – our goal is to release a game we are truly proud of.

The platforming levels that were made public were demo levels – not what you will see in the final game. We simply did not have enough final assets completed to create the actual levels we have planned. We can’t wait to show these in their final forms.

Why is the game so difficult?
Our aim is “tough but fair”. Cuphead may be challenging, but that’s what makes victory feel that much more rewarding. We want to inspire players to master the variety of gameplay techniques available in Cuphead, so the challenge level becomes a means to an end. Cuphead has its roots in classic arcade-style games, games that really made you earn success. It’s the type of game we grew up loving and something we wanted to recreate.

There is over two and a half hours of fully composed music written specifically for Cuphead. We’ve used a 13-piece big band, 10-piece ragtime ensemble, a solo pianist, singers, and a couple of surprises thrown in for good measure!

We knew early on that in order to make Cuphead an authentic experience, the soundtrack would require the same attention to detail that the visuals are getting. An exceptional amount of research went not only into getting the musical stylings just right for the era, but also to ensure each tune was chock-full of enough excitement to compliment the gameplay perfectly.

Look for the Cuphead soundtrack to be available at game launch.

Are the sound effects I’ve heard so far unfinished?
Chances are you heard our placeholder sound effects. Fear not – the final game sound effects are being created by the industry award-winning people at Sweet Justice. We think fans will appreciate the attention to detail we’ve strived for in keeping everything as era-accurate as possible.

How can I stay up to date with what is happening with Cuphead?
A great place to start would be to follow us on Twitter and Facebook. Another way to keep up with all things Cuphead would be to visit our dev. blog (you can also sign up for blog updates). Cuphead also has a website. We are a small team that have buckled down and have little time to come up for air, so while we do have updates planned, most of our focus will be finishing the game! 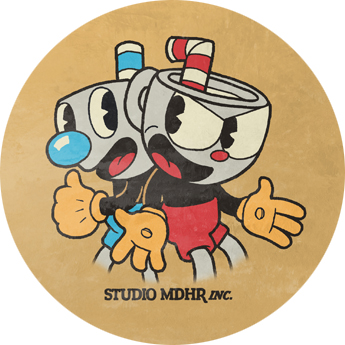 Do you have a press kit for Cuphead?
Why, yes we do!  You can find everything you need on our website.

Am I allowed to stream or use footage of Cuphead on my YouTube or Twitch channel?
You bet! We do have some simple rules though – you can check them out here.

Where can I get myself some of that sweet, sweet, Cuphead merchandise?
There’s already some really cool stuff available at The Yetee. We’ve got some additional things in the works for a little closer to launch too! Stay tuned.

Is there a Cuphead Wiki?
Yes, you can visit the Official Cuphead Wiki at http://cuphead.gamepedia.com.

I’ve got a really cool idea for Cuphead that you should implement. What should I do?
Please refrain from sending your ideas to us. We’d rather avoid any issues that may arise with someone sending us a generic idea or one we’ve already implemented. Thanks!